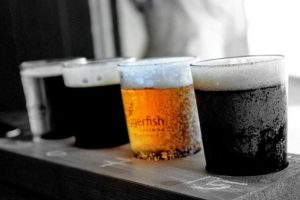 Today’s hot-topic, albeit far from a new discussion, comes from The Burnt Out Beer Guy, in which he discusses the “consumer culture where beer doesn’t necessarily need to be great anymore. It just needs to be new.”

It’s a topic for which Kaeru Beer has been both castigated and congratulated over in equal measures…from both ends of the beer industry. To many consumers it’s a moot point, a nonsensical claim that renders the author, the interlocutor and the supporter a […expletives omitted] in the eyes of the wisest of the wise! To many involved in the production and supply processes, it is a worrying trend. And to a few forward-thinkers, it’s a challenge to embrace head-on with zero compromise…at both ends of the beer industry.

Our stance has always been that if something is worth doing it is worth doing well, change for change’s sake is abhorrent, and there’s an increasing fragility within the industry due to a theoretical and unsustainable demand for more beers, more breweries, more choice and less consistency. Hundreds of years of commerce provide enough evidence to demonstrate flawed approaches like this are doomed; the industry is starting to flail under the weight of an artificial consumer-demand created by app-driven chin-strokers.

We favour organisations that promote a social, cultural and environmental conscience, and in doing so we work with businesses operating in the food, drink and service industries to create the stories, the words and the marketing that potentially create enduring sales of timeless, classic and continuously improving product that has built-in redundancy and built-in antifragility. We challenge a drinking-culture that cracks the whip, that incessantly drives an industry to lose focus on its core identity in pursuit of a drinking-audience that is motivated by disloyalty, insincerity, likes, followers and sycophantic admirers.

And as the wisest of the wise who lack any skin-in-the-game are gleefully willing to remind us, we are […expletives omitted] for placing longevity, success and legitimate growth and development ahead of instant gratification, popularity and having the most friends at the party.

And now I must go searching for a beer I’ve never drank before: a limited-edition something-barrel-aged, quadruple dry-hopped, bizarreness-infused, top-fermented/bottom-fermented hybrid, koelschipped, lager-tanked, open-foedered delight that combines Bohemian, Belgian, Munich and Burton styles with a modern contemporary American twist. Or I may just go to my favourite local bar and enjoy a brew that has been slowly tweaked and developed over decades to create a world-class beer.

Is craft beer burning out?