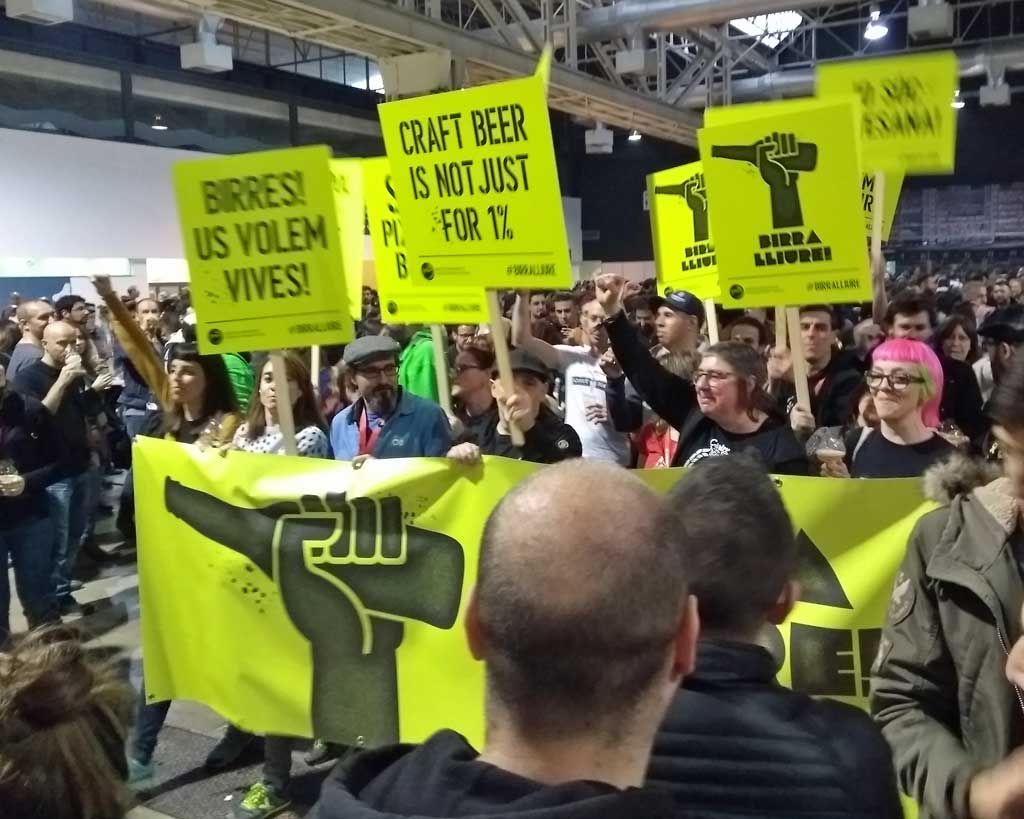 The ‘Hola 99%’ campaign’s presence at the recent Barcelona Beer Festival appears to have been a success, since the message was loud and clear, heard and understood by all attendees, whether they speak Catalan, Spanish or not.

It’s official, 1% of all beer consumed in the Catalonia and Andorra region is artisanal beer.  Meaning the remaining 99% is mass-produced on an industrial scale.  The ‘Hola 99%’ campaign aims to attract some of the 99 percenters into the world of artisanal beer, lured by tastes and delights that place the satisfaction of drinkers ahead of profit and domination.

It is a long road ahead, certainly, and the destination may never be reached, but it’s an necessary journey that ‘Hola 99%’ understands needs to be taken.  Every step introduces a quality, choice and satisfaction to the drinker.

At the side of the road, lurking in the shadows, are the industrial giants waiting to derail the journeying troubadours, waiting to consume and eradicate the artisanal breweries so that the drinking habits of many is forcefully dominated by the few.

The annals of the supernatural are filled with tales of behemoths consuming the souls of its victim in order to grow more powerful and hungry.  This open feast, whilst it is never likely to end, can be slowed and impeded by drinkers and beer-champions who value their souls enough to challenge the might of the all-encompassing giants. Are we happy to be complacent in ignoring the struggle of the artisanal brewer by allowing the giants to roam freely, or should we be taking a lesson from the ‘Hola 99%’ campaign by standing up to shout?  Are we content that the road ahead is blocked and barricaded, that the growth of the artisanal breweries is thwarted, and that the ever-present grip of the corporate giants is tightening?

What is happening in a corner of southern Europe is to be commended.  Other countries around the world have similar campaigns.  Most true beer-lovers in every part of the world are certainly aware of the potential risk associated with failing to address the stranglehold.  Yet the industrial giants straddle oceans, cross continents and transcend borders without fear, since their size brings an inherent immunity from regionalised actions.

The ‘Hola 99%’ campaign has rightly pinpointed the Achilles Heel: the drinkers themselves.  If the drinking habits of the masses shifts, the foundations of the giants will be weakened; an action that will enviably strengthen the foothold gained by artisanal brewers in recent times.

We need to stand united as a global movement, united by a love of great beer.

Not convinced?  Everybody who loves artisanal beer ought to take a look at his or her own country and culture.  Do you notice anything alarming?  Is your beer scene overshadowed by greedy industrialised mega-breweries?  Money and monopolies are great for commercial business, which delights those in positions of power.  The people struggling at the opposite end of the spectrum are not only the small artisanal brewers competing with the giants, but also the discerning drinkers whose choice to drink something delicious could be pulled from beneath them at any moment.