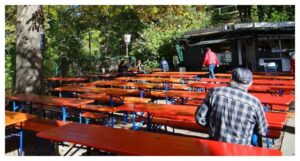 And the problems perpetuate: public health congratulates zero tolerance; Hospitality jeers for effective rules. In this performance governments are both hero and villain, and motivated entrepreneurs or visionaries gain the applause.

Social guidance rebellions coincide with a release from lockdown frustration because, given a choice between physical interaction and maintaining a safe distance, optimists resolve the dilemma with ease: believing the pandemic threat has, for them, receded. Pessimists, in contrast, perceive idealist indulgence a danger to social well-being. And so long as public opinion remains divided, the Hospitality industry struggles to reunite with loyal patrons.

Rationalists, who shun anti-science theory and adhere to social guidance, which they hope lessens social and economic hardship, form a consensus favouring cautious reopening. They realise economy recovery depends on it — it offers learning, which leads to understanding and improvements that stabilise the fluctuation. Moreover, everybody faces a universal yearning to grease stationary wheels and release lockdown’s brake, a challenge for Hospitality to balance public apathy and apprehension.

Behavioural science explains how patrons respond to a social thirst for beer, wine or liquor. Everyone takes a unique approach to each situation: while the careful assess danger, gauge situations, and speculate about consequence, the carefree remain untroubled and prioritise autonomous liberty. Background and personal circumstances define perception too: urbanites may dread city crowds more than rural villagers fear country gatherings, for example.

If a gregarious, freethinking public shows relaxed attitudes to ambiguous social guidance — something many people consider a pernicious, elitist policy of double standards, from which those with a sense of entitlement appear to be immune — is it sociopathic behaviour? Or are people justified? And supposing patrons rekindle an intimacy with Hospitality to gain a much-needed mental health boost, should pubs, brewpubs, taprooms, bars or other establishments indulge them or enforce zero tolerance?

While misguidance lacks transparency, clarity ensures fairness. The anguish of ambiguity and divisive interpretation continues to stifle the industry’s economic comeback, and deficient social guidance limits its operations. Because restricted opening hurts some establishments — to remain closed could prove worse — Hospitality calls out for change. A strategy, with explicit, enforceable controls, guarantees every entrepreneur adheres to a common understanding, free from deliberate or accidental disadvantage.

The Hospitality dilemma is that miscalculated, misconceived mandates expect people to cherry-pick and regulate their own behaviour. And the industry loses its workable cohesion in high stakes hypotheses testing, gambling its income in real-time. Good entrepreneurial judgement involves scrupulous discretion and effective governance, yet while everybody’s livelihood haemorrhages, some see tantalising cut-throat opportunities to embrace, and others survive only by finding loopholes to exploit.

Strategic errors occur when industries like Hospitality are considered distinct deterministic units — actions and consequences display predictable, repeatable and linear cause-and-effect behaviour. In reality, they are Complex Adaptive Systems (CAS), formed of multiple interconnected and diverse components, each of which is itself a CAS — interdependent and acting with autonomy. Attempts to remedy the whole system through intervention in a single area are thus ineffective.

Opportunity cuts both ways, and mismatched constraints that benefit some establishments and disadvantage others are emblematic of partial reopening chaos. Because social guidance permits trading that compounds Hospitality losses, it is right for entrepreneurs to raise their concerns, yet lawmakers seldom hear solitary opinions or conflicting claims. A single, unified industry voice protests with greater power, channelling extensive knowledge into a consistent response to mutually exclusive, contentious dilemmas.

Distinguishing between efficiency and effectiveness — doing things right or doing the right thing — is recognising when clinging to known, established models works today and when breaking the mould and adapting to circumstance works tomorrow. Trade organisations (and diligent entrepreneurs) have mastered this tenacious discipline, which bewilders the statistical outlier.

Even as establishments balance partial reopening’s advantages with unworkable guidance disadvantages, national trade organisations urge their governments to reconsider the damage. Some members prefer their own threat management, others reject the unjust one-size-fits-all approach — perhaps a third group denies the pandemic or its effects. Although the arguments may differ, every region’s Hospitality industry faces an identical struggle: staring into an uncertain future with an acute need to recuperate lockdown losses.

The Sword of Damocles hangs precarious over Hospitality, and it is double-edged: a challenging contradiction between easing a dire economic situation and, inherent in further outbreaks, avoiding another shutdown. Cautious, limited reopening or full, unrestricted relaunch — both pose a potential threat to income. By respecting industry methods and public need, however, balanced guidance can successfully involve Hospitality in social healing after prolonged, damaging stay-at-home orders, rather than deliver an unfair blow to those already struggling.

Even though everyone tends to predict an inaccurate future, dynamic entrepreneurs, who react with instinct to changing expert advice, respond well to the coronavirus (COVID 19) ebb and flow. Astute thinkers learn to learn, adapt to circumstance and uncover hitherto unknown industry revenue streams: maximising opportunity to future-proof income. Using threat management and innovation as a defend-attack strategy, Hospitality will again prosper in time — despite the lengthy recovery.

“A world of flat organisations and tumultuous business conditions — and that’s our world — punishes fixed skills and prizes elastic ones.”
–Daniel H. Pink, To Sell is Human (2013).

The prized elasticity to which Daniel H. Pink refers in 2013’s To Sell is Human is a goal for everybody, not only individuals, but also industries. Adaptable, flexible and responsive to change are desirable qualities for 21st century people, whereas the opposite qualities — the obsolete ‘fixed skills’ — limit opportunity and demonstrate deficient foresight or potential. Entrepreneurs recognise this, and Hospitality learns from it. Adaptable, flexible establishments, which are responsive to change, may find it easier to adopt new practices during future crises.

National rescue packages present a paradox, inasmuch as fiscal support that shoulders a tanking economy carries an implicit burden to repay bailouts. The impact may last generations and prove fatal to businesses teetering between profit and loss. But an alternative approach suggests far-sighted government acumen could avoid excessive commercial disaster across many industries.

If post-COVID transformation aligns with current thinking, economic goals shift from a damaging growth fixation to inspiring businesses to thrive in balance. In Doughnut Economics: Seven Ways to Think Like a 21st-Century Economist (2017), economist Kate Raworth discusses why fixation on GDP (national output) justifies “extreme inequalities of income and wealth coupled with unprecedented destruction of the living world.” Today’s social guidance should, where required, steer Hospitality towards thriving in balance, for “what we need, even in the richest countries, are economies that make us thrive whether or not they grow.”

Without national foresight to drive domestic commercial revolution, who covers the shortfall and offers the insight leading Hospitality towards successful transformation?

Preparing for the unimaginable

Foresight expects the unexpected, imagines the unimaginable and plans for randomness — the so-called Black Swan events: inconceivable, albeit possible, rare occurrences that are unlikely to occur but would prove disastrous if they did. (COVID 19 differs from Black Swan events because experts predicted a novel coronavirus ravaging the global economy — yet no one listened!) Agile entrepreneurs’ rapid response to lockdown involved deliberate innovation, deviation and urgent randomness planning. An ability to gain swift advantage proved an important lesson.

Prescribed solutions to anticipate randomness are futile, and any such planning guide is worthless. If following a simple checklist were possible, it would be inadequate, for strategies built on known outcomes become the unimaginable event’s first casualties. And economic differentiators occur by following a distinctive path. The single workable preparation for randomness involves unique thinking, unbiased analysis and honest self-reflection: abandon judgement, preconception and existing notions.

Such thinking offers a significant by-product: entrepreneurs discover their own game-changing disruptive innovation.

Beneficial shocks to the system

“It is painful to think about ruthlessness as an engine of improvement,” Taleb writes. “For the economy to be antifragile and undergo what is called evolution, every single individual business must necessarily be fragile, exposed to breaking.”

If every establishment were robust or immortal, as Taleb suggests, Hospitality would be ‘stagnant or weak’ and lack ‘quality, stability, and reliability’. Because nobody in the industry wishes to be labelled in this manner, failure is an important economic factor to acknowledge.

“Had restaurants been individually robust, hence immortal, the overall business would be either stagnant or weak, and would deliver nothing better than cafeteria food — and I mean Soviet-style cafeteria food.”
— Nassim Nicholas Taleb, Antifragile: Things That Gain From Disorder, 2012

Taleb’s salient-in-2020 bailout warning speaks to Hospitality entrepreneurs and trade organisations: “governments typically favour a certain class of firms that are large enough to require being saved in order to avoid contagion to other business. This is the opposite of healthy risk-taking; it is transferring fragility from the collective to the unfit.”

Because returning to business-as-usual was impossible, commerce adapted following the Black Death. That pandemic created a Late Middle Ages ‘new normal’ in which those who adopted new practices and invested in new technology gained market dominance. Machines replaced people, the rich got wealthier and government power increased. And while large businesses monopolised, small ones disappeared.

To triumph amid tomorrow’s business challenges, today’s entrepreneur seeks evolution, respects randomness and applies antifragile ideas. If unrestrained thinkers and careful risk-takers have what it takes to endure and blossom, endemic threats may prove relatively harmless to establishments that welcome opportunity.

Image by JanneG from Pixabay

Author: P_____
How struggling business and creative freelancers help each other