A beer festival is all the world 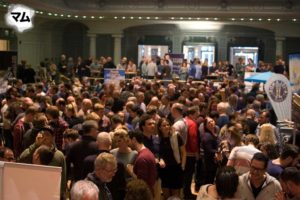 “I’d like to ask your help,” urged a mischievous John Lennon in 1963 at the Queen’s annual Royal Variety Performance.  “Would the people in the cheaper seats clap your hands?  And the rest of you, if you’ll just rattle your jewellery.”

And so, the leveller broke through class barriers in just a few words and united a theatre-going establishment and a never-before-seen pop sensibility and street culture.  Today, theatres open their doors to events that demonstrate a change in social and cultural attitudes unthinkable only half a century ago.

And that is a very good thing.

Held in the city’s opulent Stadsgehoorzaal, LIB Leiden Speciaalbier Festival 2019 effortlessly mixes beer, history, culture and food.  And the twinkling lights and other trappings of theatrical elegance ensure this is a weekend of a thousand stars.  And the winner is…

…impressive beer in impressive surroundings in the company of impressive people.  Naturally.

The main attraction is a show of two halves, equal in stature with neither taking top billing.  Both presentations happening simultaneously; the Grote Zaal playing host to some leading performers in the beer-brewing world who relish the expansive elegance to showcase their finest beers; the aura of delight shimmying down the stylish staircases from the Breezaal confirms a handful of rising stars, international newcomers and local heroes of the beer world are capably showcasing their talents at this weekend’s fringe event.

Dominating the Grote Zaal is the stage with its colossal, cathedral-like organ that overshadows a couple of heavyweight legends — Kompaan Bier and Van Moll — who flank the event’s main sponsor, Palm.

Take a short promenade around to the rear of the hall, to what Lennon may have perceived as the ‘cheap seats’, and a couple of international names are certainly proving themselves deserving of a top-billing this weekend: Ireland’s Larkin’s Brewing Company – refreshingly independent and proving that the best dry stout from Ireland does not need to be a household name – and Turning Point Brew Co. from Yorkshire in the UK – another example of that county’s incredible talent.

A truly international cast performs on the main floor of the Grote Zaal, with NOVO Brazil Brewing CO. and 4 Islands Brewing, respectively representing Southern California’s and Rotterdam’s Brazilian soul.  Opposite sits Spanish distributor Yria Cerveza Artesanal, presenting a handful of wonderful beers with equally wonderful names.  Wonderful beers are also presented from The State of Southern Beer (North Carolina), many of which are now well-established household-names in the Netherlands thanks to All kinds of Beer — their presence at LIB is once again a highlight.

Another welcome feature of any beer festival is HappyFace Beers, this weekend showcasing not only some of its finest core beers, but also the BEEK Kopstoot (a Tripel, infused with BEEK barrel-aged Jenever) and an easy-drinking Session IPA.

Leiderdorp’s Neptunus Bier also showcases the best of its special beers, while the Stadsbrouwhuis — located adjacent to the Stadsgehoorzaal — highlights the Leiden-designed and Amsterdam-distilled Goeie Mie Gin.

No beer festival is complete without a barber.  And it’s the nearby Di Fretti’s Barbershop that provides this weekend’s hirsute elegance in the side-room that also offers many foodie delights to keep the beer faithful satisfied throughout the weekend.  And in keeping with the Leiden tradition, all the international foods on offer are from local Leiden kitchens.

It’s not only the number and quality of excellent breweries that ensures the upstairs Breezaal is a headlining event in its own right, it’s the Renaissance Revival architecture that creates the perfect environment for sampling great beer.

The Estonian flags are flying high this weekend.  And rightly so.  The large blue, black, and white tricolour strung between two ad-hoc KeyKeg ‘flagpoles’ indicates the Estonia section, in which Lehe Pruulikoda and Sori Brewing prove the Baltic states continue to up their game.

Other highlights of the crowded Breezaal include X-brewing, one of the newest breweries at the event, capably demonstrating it has the elusive X-factor that will keep enthusiastic drinkers coming back for more again and again.  Elsewhere it’s Amsterdam’s Mokums Mout that joins the list of nominees for the event’s best beer with its De Cuyp Brett Dubbel Special Edition.

Also presentating a handful of new beers to the appreciative drinkers is Brouwerij De Oude Rijn, demonstrating that smaller breweries are capable of producing some extremely high quality beer.

And no event in Leiden would be complete without Brouwerij Pronck proudly waving the flag for capable brewing and excellent beers in the local area.

As another year’s award-ceremony season nears its climax, LIB Leiden Speciaalbier Festival 2019 is a favourite contender for several high-profile beer accolades.  As the calibre of the event gets stronger each year.

The life and soul of a party at LIB Leiden The Dutch Beer Festival year shifts gear this weekend. It switches to cruise control for a long, hot summer of anticipated events, beer discoveries, rekindled friendships and a rich landscape of the best new, established, national or international brewers presenting their latest offerings and core classics to an ever-increasing audience of appreciative drinkers.

The Dutch proverb of “leven in de brouwerij” (LIB) is literally translated as bringing life to the brewery, yet it is used to suggest something bringing the proverbial life and soul to a party.

The 2019 festival scene accelerates to optimal velocity on Saturday and Sunday as LIB Leiden Speciaalbier Festival livens things up by not only bringing life and soul to the party, but also a diverse range of breweries and drinkers.

Once again, the impressive Stadsgehoorzaal in the heart of Leiden plays host to LIB Leiden, continuing to prove that historic settings are perfect for history-in-the-making events. And local or guest beer is, of course, one of oldest social and cultural focal points of which a city can be proud. And Leiden can be proud that LIB Leiden brings together some of the finest Leidse Brouwerijen — Leiden Breweries — for this annual highlight of the province.

The Stadsgehoorzaal ‘s 19th century built-for-acoustics Grote Zaal and the Breezaal with its Renaissance Revival architecture welcome over 25 national and international breweries — with a greater emphasis on the international this year.

The Leiden area is well represented with, amongst others, Neptunus Bier and proud locals Brouwerij Pronck. The summer beach vibe is in evidence with Rotterdam’s very own Brazilians, 4 Islands Brewing, proving the Netherlands is the place to be for great Craft Beer.

Many other well-known Dutch breweries present their dependable beers, from Van Moll to Kompaan Bier to HappyFace Beers. US Importers All Kinds of Beer continue to delight with North Carolina’s finest beer. And other anticipated Dutch breweries this year include, Brouwerij De Oude Rijn, Mokums Mout and the rather intriguing X-brewing.

The international contingent consists of Lehe Pruulikoda and the omnipresent and very-welcome Sori Brewing, both from Estonia. The UK’s Turning Point Brew Co. once again demonstrating that the smart money is on the north of English for some of the best British Craft Beer. And Ireland’s Larkin’s Brewing Company is a welcome addition, proving correct those who say the next big Craft Beer boom will be coming from the Emerald Isle.

With such a stunning array of breweries, some great live music and a wide-variety of international food (all supplied by local Leiden kitchens, of course), LIB Leiden on the 9th and 10th March is definitely going to be the life and soul of a party.