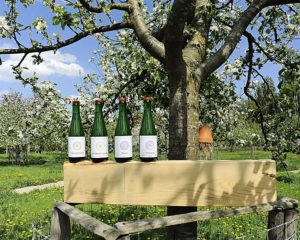 Firstly, there are the cider fanatics who not only relish Dutch artisanal cider for its quality, but also cherish traditional production methods used from time immemorial — the cider-making process remains unchanged over many hundreds of years. Then there are beer-drinkers who enjoy something different now and again, so long as it’s refreshing, flavoursome and handmade by skilled craftspeople. There are the champions of Dutch produce: those who rightly support, encourage and promote homegrown and homemade stories of success, especially if its locally produced and nationally or internationally celebrated. There are those who want to know more, those who recognise the current boom in Dutch cider production and are keen to investigate the phenomenon — what is driving the resurgence of a very, very historic and traditional beverage produced by nature itself with little more than the skilled hand of an artisan to guide the way?

And finally, there are the foodies, bar owners and restaurateurs who consider cider a delicacy on the same pedestal as fine wine and high-quality craft beer.

And there are many, many others who appreciate good cider. There are many recent converts to the delights of De Vergeten Appel, as well as many longstanding supporters and fans.

This weekend, De Vergeten Appel throws open the doors of its new Cidery to welcome visitors and to celebrate the new production facility. (A ‘cidery’ is to cider what a brewery is to beer.) The celebration also coincides with De Vergeten Appel expanding its portfolio with a fifth cider — another reason to visit and be amongst the first to taste this extra special cider.

De Vergeten Appel owner and founder Johan Holleman started producing cider in his garden, but he soon outgrew those humble beginnings and moved to a shared facility in central Tilburg, from where the story goes from success to success. Steady growth and an increased interest in De Vergeten Appel meant a new production facility with heating and warm water was inevitable. Furthermore, De Vergeten Appel now has a cidery in the Hindeloop, Biezenmortel, that sits alongside an orchard.

The Opening and Open-House event is officially on Saturday, 11 May 2019 from 12:00 to 17:00, but De Vergeten Appel will also be open on Sunday to continue the celebrations.

Don’t forget to visit and taste some delightful cider produced from wonderful and unforgettable apples.

Author: P_____
A festival of festivals in the city of beer
Berlin excels at the Handgemacht-Brauereifest