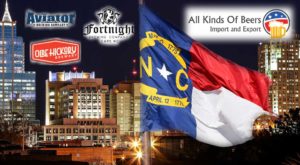 Which event celebrates its 40th anniversary in 2019? Which monumental occasion kickstarted a Craft Beer revolution? Before this milestone the world of beer was very different.

Imagine it. A handful of breweries . A small number of beer styles. A tiny fraction of the choice we have today.

President Carter’s HR 1337 bill took effect in February 1979. Homebrewing in the USA would be exempt from taxation. The bill gave homebrewers a wider scope in which to experiment and hone their skills. Paving the way for a rush of brewpubs.

How did these events stimulate the Craft Beer revolution? The popularity of Brewpubs exploded. Standalone breweries emerged. The sturdy walls of an industrial beer monopoly began to crumble.

And why is it important to pay homage to US Craft Beer?

Because the rise of Craft Beer in the USA directly influenced a global beer transformation.

One thing is for certain, without US Craft Beer our choice in Europe would be limited to a handful of artisanal brewers that struggle to compete with two or three beer giants.

So where in the USA should we be looking to find great US Craft Beer? Which State boosts a high concentration of great breweries that have made it a top national and international beer destination?

But first we need to ask ourselves what makes a US State great for Craft Beer. Passion? A vibrant energy? An agricultural heritage with an abundance of local ingredients? A reputation for high quality? Bars, brewpubs and taprooms that are abuzz with a lively ambience? A desire to advance its brewing interests further afield? A local pride in its excellence and economic growth?

North Carolina is The State of Southern Beer. It offers all of these things and more.

Tasting the great State of North Carolina is the climax of a journey in pursuit of great beer.

And don’t forget. The number of medals earned by North Carolina’s breweries at the Great American Beer Festival and World Beer Cup surpasses any other Southern state and exceeds many other states nationally.

So how do drinkers in Europe get to experience great beer from North Carolina?

All Kinds of Beers B.V. focuses on high quality and great service. With a presence in both the Netherlands and North Carolina, it has established its reputation as a superior importer of US Craft Beer to The Netherlands.

Tasting the great State of North Carolina is the climax of a journey in pursuit of great beer.

But don’t take our word for it. Experience it for yourself.

Some of North Carolina’s finest breweries will be in the Netherlands in early January 2019. A series of public events are planned. Tap Takeover and Meet The Brewer sessions are happening at:

So, if you’re a lover of great Craft Beer, experiencing the taste of North Carolina is a must.

And if you’re a supporter of Dutch involvement in the global beer industry, you’ll also be pleased to see North Carolina’s finest beer dispensed from KeyKeg.  KeyKeg advocates can be found throughout North Carolina, the USA and across the wider world of Craft Beer.

Come along to one of the events. Try some great beers. Meet the brewers. Learn more about the State of Southern Beer. Discover the fabulous state of North Carolina.

Perhaps even raise a toast to Craft Beer. And its humble origins in President Carter’s HR 1337 bill.

Author: P_____
So, what exactly is Glühbier?
Culture Contact: Social, Hospitality and Hostelry