A festival of festivals in the city of beer 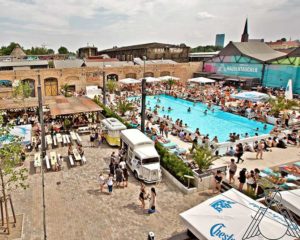 For decades Munich has been the de facto destination for beer tourists who visit Germany in search of many of the world’s best beer styles, most notably the variety of Bavarian lagers.  However, Berlin is rapidly becoming the destination for beer-lovers who seek craft brews and artisanal production methods.

It is somewhat inevitable that a city with such a rich tapestry of cultural and counter-culture references should take on the mantle of craft beer.  Berlin rightly sits alongside Munich, Portland, San Diego, Burton upon Trent, Plzeň and every other great hub of beer culture in proudly demonstrating to the world that it is, once again, a centre of excellence.

2019 sees a bigger, better Berlin Beer Week celebrating its 5th anniversary.  For 10-days at the end of July each year, many thousands of visitors descend upon Berlin to celebrate the best of beer at numerous events and happenings that have become firm favourites on the global beer calendar.

Berlin Beer Week shifts gear in 2019, and the momentum of 10-days’ artisanal beer culture culminates in a closing event unlike any other.

Imagine assembling more than 20 world-class beer festivals into a single event.  Imagine if each of these festivals presented the best beers from the best breweries in their home countries.  Or maybe it’s an unimaginable scenario, something that only exists in the dreams of beer-fans and aficionados.  If it were to happen it would take the beer festival concept to another level, an extraordinary and unprecedented event — it would quite literally be a festival of festivals.

And it’s going to happen!

It’s going to happen for the first time in 2019.  On Friday, July 26 and Saturday, July 27 at the Haubentaucher, the centre of Berlin’s urban hedonism.

FESTIVAL2 is the closing event of the Berlin Beer Week.  FESTIVAL2 will offer visitors around 100 beers per day, all included in the cost of admission.

Not only that, but each Festival participating at FESTIVAL2 will present its own cultural activities around the huge outdoor pool to ensure the event will be something special, something to remember, and an event not to be missed.  Add an abundance of great street food and the event is likely to be a European cultural highlight of the year.

Amongst the participating festivals are:

Thankfully there is such an event. And Billie’s Craft Beer Fest will be part of it.

Under the watchful eye of the eponymous Billie, the beer-world’s foremost French Bulldog, this award-winning Beer Festival is held over 2-days in the weeks preceding Christmas and is extremely popular with not only beer-lovers, but also the best Belgium and global beer-lover-loving breweries. 2019’s event is likely to be no exception: demand for tickets is high; desire to participate it high.

“All hail Billie!” is an apt catchphrase for the event.

Everybody has his or her favourite beer style, and a style that has seen an unprecedented rise in popularity over recent years is the Sour. Enjoyed by many, misunderstood by a few, and worshipped by beer-lovers throughout the world.

Each year at the end of May / beginning of June, the northern Italian city of Reggio nell’Emilia welcomes local, national and international Sour Beer aficionados to the Arrogant Sour Festival, one of the most important Sour Beer events in Europe (and perhaps the World) and certainly one of the largest of its kind in Italy.

Contrary to popular assumption, ‘Eurhop’ is not a portmanteau word — It’s not a linguistic blend of Europe and Hops. The ever-popular Eurhop Roma Beer Festival is held over 3-days in Rome’s Esposizione Universale Roma (EUR) residential and business district, just south of the city centre.

Beer Festivals in Italy are always impressive and certainly a joy, despite the occasional absence of information and advance planning that sometimes makes them something of an unknown enigma (and a challenge for international visitors). That being said, Eurhop Roma Beer Festival is popular with locals and overseas visitors due to a great mix of Italian Craft Beer — world-class, in many cases — and popular international breweries.

The clue to Carnivale Brettanomyces’ focus is in the name. It’s not only a beer event that attracts wild yeast-lovers from across the world, drawn to Amsterdam for a week of farmyard flavours and beers residing on the sour side of the barn, but it is several days of lectures, workshops, food-evenings and tasting sessions that promote a love for the wild-side of beer, cider and other fermenting delights.

Happening in breweries, taprooms, bars and other relevant locations accroiss Amsterdam in mid-June each year, Carnivale Brettanomyces is quickly becoming one of the go-to events in the global beer-calendar.

The Van Moll Fest 2019 hosted by Van Moll gets more popular and successful each year, the consequence of presenting a great event in a great location with excellent participating breweries and wonderful beers. The popularity of Van Moll itself is certainly a contributing factor, too. Held over two days in August in Eindhoven (the Netherlands) this event invites some of the best international breweries and it ensures the beer selection is different on both days.

Each year in mid-October, Stavanger, Norway, is the destination of choice for both international beer-lovers and excellent breweries. Norway is not a newcomer to the international Craft Beer scene, and its astonishing breweries have been impressing and delighting both Norwegian and international drinkers for a long, long time. Norway is one of the countries embracing the Craft Beer boom — relishing the opportunities to not only produce great beer locally, but also to welcome international breweries for some interesting collaborations.

WB19 is the one events that relishes the opportunity to present great local, national and international beers to the Norwegian beer-faithful. It also opens its doors to welcome international beer-lovers and provide an intriguing introduction into what makes this part of northern Europe so special for beer.

Much has been said about the beer scene in Catalonia. Words of praise are justly deserved. Barcelona and the greater Catalan area excel in all things beer: brewing; bars, beer-cafés and pubs; and beer festivals. Barcelona has not only one great international beer festival, but two, both of which are highly regarded throughout Europe and the World — there are most certainly more beer events that make this small corner of Europe the destination of choice for beer-lovers…over and over again.

Now in its eighth edition, La Fira del Poblenou — the fair of Poblenou — welcomes many international breweries and visitors to this highlight of the summer. The Poblenou district of Barcelona is where the beach meets one of the city’s most popular residential and nightlife areas, teeming with bars, restaurants and trendy shops. It is therefore appropriate that the area has its own world-class beer festival.