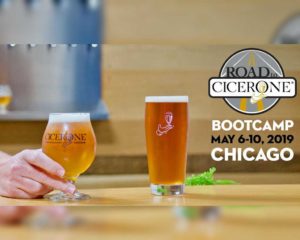 It’s said the first step is always the most difficult.  In our case it was a 4,000-mile first step to Chicago in the spring of 2018.  Difficult because our departure from Amsterdam coincided with the year’s first tulips — a colourful Netherlands was in full bloom — and yet our arrival at O’Hare Airport coincided with a rare late-in-the-year snowstorm.

But no time to enjoy the wintery atmosphere; we needed to negotiate a somewhat chaotic, snowbound “L” and make our way to the Cicerone Certification Program’s North Chicago base for the intensive Road to Cicerone Bootcamp: a week of beer-activities and beer-tastings for Certified Cicerone candidates.

And the sun did eventually arrive a few days later.

For 5-days, 24-Beer Professionals from across the USA and beyond gathered in a classroom overlooking the “L” for 7-hours of lectures, hands-on and interactive activities, guest-speakers and brewery visits — plus a couple of multi-course beer- and food-pairing dinner evenings.  Everything focused on the comprehensive Cicerone Certification Program syllabus.

A more diverse cross-section of beer-professionals cannot be conceived than that which attended our RTC Bootcamp.  Brewers, hop-growers, brewery-owners, beer-cellaring app developers, bar-staff, brewing assistants, beer-writers, professional coffee-tasters, bar-owners, and so on.  And herein lies much of the value in the RTC Bootcamp.  A week spent in the company of the Cicerone Certification Program Team, Master Cicerones, industry professionals and distinguished experts is priceless (see the Cicerone Certification Program website for costs!), yet it is the insight, knowledge and input from 24 random Beer Professionals — many of whom are globally-focused — that gives the week-long schedule an interesting and valuable real-life narrative of how things work in practice.  Priceless.

Moreover, a camaraderie develops during the week and friendships are forged.  It is perhaps this aspect of the RTC Bootcamp that is most memorable for us, especially when Cicerone Certification Program matters are still discussed nowadays with friends we met only a year ago in a rare Midwest snowstorm.

The genuine friendships may be determined from a 2018 Road to Cicerone Bootcamp Group Photograph, taken after a beery-lunch on the final day!  Unless that’s actually due to the beery-lunch.  It would be nice to see it someday.

It’s a shame that close bonds between the attendees only formed later in the week.  We’d suggest a social ice-breaker on the first day (or even the day before, knowing that many attendees are in hotels across the city).  It transpires that each evening, a majority of attendees were criss-crossing the Chicagoland area in the pursuit of beers, bars, breweries and bottle-shops, each working to his or her own plan and agenda; doing this as a unified group may have been yet another valuable experience to add to the list of positives about the RTC Bootcamp.

And besides, I have an ulterior motive.  It transpired on the final day of the RTC Bootcamp that I’m a Skeeball-wizard, despite never playing it before.  Further opportunity to beat the natives in their own bar-game in one of their own bars would have been a real boon to the classroom pecking order.

Anyway, enough of the extracurricular activities — let’s get back to the Cicerone Certification Program.

A week spent in the company of Ray, Pat, Neil, Shana and the others in the friendly, welcoming Cicerone Certification Program office is an experience not to miss, especially when combined with a well-selected group of visitors and guest speakers that includes the inimitable Randy Mosher.  Visiting chefs, beer and food, beer and cheese — it’s all here, including a “culinary brewing” session with Moody Tongue’s brewmaster Jared Rouben.

A lot of preparatory reading is recommended to get maximum benefit from the RTC Bootcamp — a lot of reading! — but it’s certainly a worthwhile investment in time to ensure full value is gained during the week.  It’s an intensely-focused week that condenses a lot of content into only five relatively short-days (the clue’s in the name: ‘bootcamp’), but it’s enjoyable, educational, valuable and the chance to shine a light into those dark areas of knowledge in the company of proven, certified experts is somewhat enlightening.

The Cicerone Certification Program syllabus is familiar to those of us who’ve sat one or more Cicerone Exams, and potential candidates may be surprised at the depth, breadth and quality of the beer-industry focused topics contained within.  All of which is covered at the RTC Bootcamp and then some.

Beer tasting, style discrimination, comparison and descriptive analysis; ingredient sampling, sensory assessment and beer-food pairing; off-flavours; draft beer systems; beer history and culture; the brewing process, ingredients and raw materials.  Did we mention beer tasting?  Aside from the large quantity of Dutch industrial beer (used as the basis for off-flavours — although much of it is skunky to begin with), there were a few European rarities being shared, much to the delight of our American friends, as well as a few rarities from the US, much to our delight.  Just don’t sit behind thirsty drinkers in the front-row who leave those in the back-row slightly thirsty!

What would we change about the Road to Cicerone Bootcamp?  Not much.  Perhaps nothing.  We’d encourage friendships and camaraderie to develop earlier in the week so that attendees from diverse backgrounds can mutually gain value from many different perspective on a social basis throughout the week.  But otherwise, it’s perfect and something anybody serious about pursuing the Cicerone Certification Program should seriously consider.

Author: P_____
Paying It Forward
A festival of festivals in the city of beer