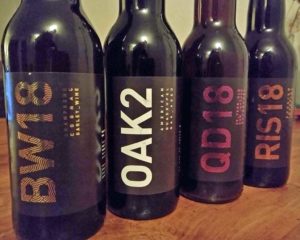 In today’s crowded market an ever-increasing number of start-up Craft Beer breweries compete for finite consumer expenditure.  Shelf-space is finite, too.  How a Craft Beer sells itself visually in a supermarket or bottle-shop is vital to success.

A Craft Beer that demonstrates it understands branding and consistency is well-positioned to be selected first by any consumer unacquainted with the brewery.

Whether the industry likes it or not, the number of consumers who buy Craft Beer based on reputation and prior knowledge is limited.  A Craft Beer brewery must therefore entice potential consumers to select its beers rather than competitors’ in order to grow and increase market-share.

Craft Beer breweries that recognise branding and consistency utilise their shelf-space wisely and present themselves as a highly-visible, attractive proposition to browsing shoppers.

Conversely, a Craft Beer brewery amusing itself by choosing a confusing muddle of colours and shapes is not only failing to potentially attract adult eyes, but also failing to demonstrate any concept of consistency on the shelf of Craft Beers that appear distinctly dissimilar from one another.

Have fun, for sure, but try to make each design appear to be in harmony with its family.  Be comical if that’s your message.  Be bright, flashy or garish if you must.  But be consistent, if only for the sake of your success.

A lesson can be learnt from browsing a supermarket and looking at the branding used by successful companies outside of the Craft Beer industry.  It is evident — even if the logo were removed — that each product belongs to the same family.  Some of these companies have a marketing and market-research budget larger than the turnover of most upcoming Craft Beer breweries.

Even without a market-research budget, a Craft Beer brewery making the transition from start-up to mainstream supplier need spend nothing to ask shoppers in a store which Craft Beer on the shelves looks: a) professional, b) appealing, or c) flavoursome.  Which would they choose if they were selecting a Craft Beer?

A brewery with bottles or cans of Craft Beer that appear wholly dissimilar from one another may be surprised at the answers.

The winning formula is therefore high quality, great flavour and a branding and consistency that entices potential consumers to invest in this particular Craft Beer. Many brewers may undoubtedly baulk at the suggestion that the beer itself is not the most important aspect of a Craft Beer in attracting potential consumers.  Yet without attracting potential consumers the scope for business growth and expansion remains strictly limited.  In these case, it is sometimes better for those responsible for the production and quality of beer to be separated from the commercial activities of a brewery.

This writer, recently browsing the Craft Beer selection in a store, was immediately drawn to an entire shelf of beers from the same Craft Beer brewery, simply because of the instant and immediate impact made by successful branding and consistency.  The brewery in this case was Berging Brouwerij.  The initial seed of interest was sown, and once purchased and consumed it was evident that quality and flavour combine with the branding and consistency to offer consumers the whole experience.

Had the initial visual impact been less enticing, no sale may have occurred.  A valuable lesson to learn for breweries still clinging to visuals that appeal to existing fans rather than to a new and potentially lucrative market.