Getting to know: Old Dairy Brewery 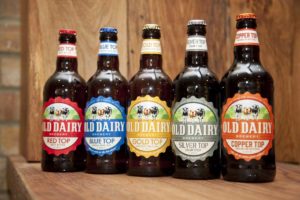 A clue to its history and roots lies in its name. It’s not too challenging: Old Dairy Brewery was founded in 2009 at a former facility for milking dairy cows in Kent, an English county known to beer-lovers across the globe for its world-class hops. Old Dairy Brewery rightfully produces the majority of its award-winning beers with Hukins Hops, grown only a few miles away. Other world-famous Kentish hops such as Cascade, Challenger, Goldings and Fuggles are prominent too. There has always been a close relationship between breweries and dairies, with much former dairy equipment often gaining a new lease of life when put to work in the production of perhaps the second greatest bounty of nature: beers and ciders. The first being dairy products, of course!

Old Dairy Brewery went one step further and reinvented a whole dairy as the production hub for its award-winning beers.

Having outgrown its former milky home, Old Dairy Brewery relocated in 2014 to a couple of WW2 Nissen buildings next to the historic Kent and East Sussex Railway in Tenterden. Steam trains, dairies, hops and beer in the Kentish Weald — it’s a scene straight from the world of Sir John Betjeman.

Old Dairy Brewery excels in the production of classic English Best Bitters and Pale Ales, and also a handful of seasonal and speciality beers. Its core range of beers, instantly recognisable by their eponymous coloured bottle-tops (a reverent nod to the one-time practice of colour-coding different varieties of bottled-milk) contains a couple of recent CAMRA Champion Beer of Britain finalists. And the recent introduction of the Cattle Shed Brew Co brand, which focuses on Craft Beer, takes the range of offerings to higher-levels of taste and quality. 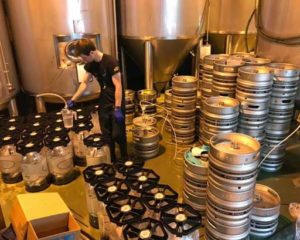 Bovine puns abound with the apt-for-its-dairy-roots Milk Stout, wittily named “No Bull”. But congratulations for a wonderfully comical name goes to the Cattle Shed Brew Co’s Imperial Porter, the “Dark Side of the Moo” — itself the recipient of a SIBA Supreme Champion Small Pack Beer award. In the parlance of colour-coded bottled-milk varieties, silver is usually whole milk. It is therefore no surprise that Old Dairy Brewery’s “Silver Top” is a cream stout.

The presence of a brewing team whose skills and talent were nurtured in the USA — a concept Sir John may have struggled with — brings a heap of authenticity to both the classic-British-beers-with-a-contemporary-twist and the modern US-, Belgium- and other international-influenced beer-styles, such as the Orange Pale Ale, a Kolsch-style beer, a Strong Dark Ale (the CAMRA Supreme Champion Beer of Britain) as well as Imperial Russian Stouts, Double Hopped IPAs, vintage and historic beers and the intriguingly-described ‘Wild Hop’ beers.

Don’t chew the cud, get moo-ved by Old Dairy Brewery — fresh craft beers and craft ales from the Garden of England.