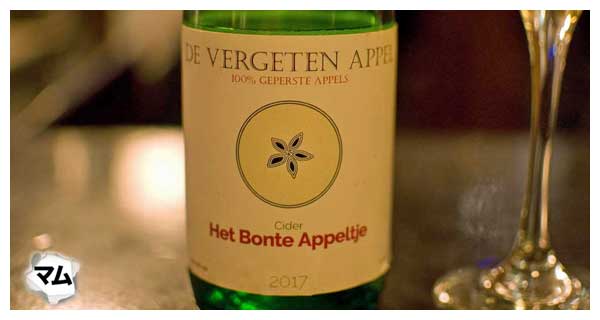 Johan Holleman acquired his first apple tree in 2009, a gift from a neighbour whose dogs refused to share the garden with it. It produced so many apples that by 2014 he did not know what to do. Eating them or baking pies could not offset the quantity — such was the tree’s prolific production.

Despite a passion for Normandy cider, Johan had found only a few home-grown Dutch examples. His brewing and winemaking experience told him these apples would make delicious cider. And so, North Brabant’s De Vergeten Appel was born.

Being innovative and creative with his own apples did not end there. Johan started gathering forgotten apples from local gardens and small orchards nearby — excess, unused stock. Classic Dutch apple varieties, almost forgotten.

Johan planned an initial 20 litre batch, a taste experiment, but it become 120 after a friend donated more apples from an abandoned orchard — perfect to test fermentation techniques for a unique, special cider taste.

In the early day’s Johan hand-produced up to 580 litres of cider. As capacity increased, he replaced various modified DIY tools with better equipment, until he scaled up and improved the production facilities in 2016.

Although a modest cidermaker, De Vergeten Appel’s capacity is 1,500 litres, plus bottling and cold storage. Alongside ‘t Gouverneurtje, the cider range includes Het Bonte Appeltje, Moesj, oak-aged Moesj, other specials, and a cider vinegar. There is also a perry: Peerke.

New for mid-2020 are a chardonnay barrel-aged cider, and a pommeau.

De Vergeten Appel’s ciders are available as new batch or vintage (37.5 cl and 75 cl bottles, plus 20 l KeyKegs) because, as with all artisanal products, each year’s cider offers a unique character.
Tasting Set boxes are available too.